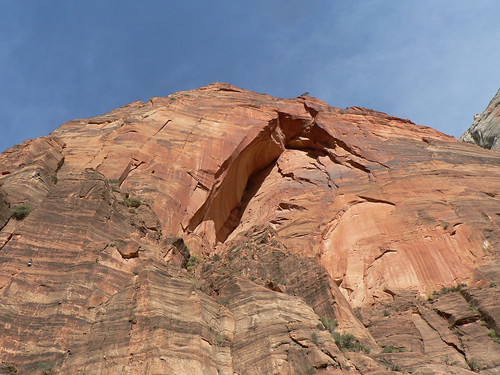 Rock climbing is a tough, challenging activity that requires not only great skill and strength, but also the right equipment. This equipment is used to stabilise the climber on sheer rock faces, to secure them should they slip and also to protect them from the impact of a fall if they come into contact with a rock below.

The number one concern when a person is rock climbing is preventing a fall that causes injury; because of this, the most important gear that a climber will use is their harness and rope system. Climbing ropes are designed to be able to withstand heavy weights without breaking; they’re made with a core of fibres that are twisted and surrounded by woven fibres. These ropes are quite elastic and flexible, which means that they are far less likely to break if they are put under sudden pressure. This flexibility also means that if the climber falls, they are less likely to suffer from whiplash, as the rope will bounce slightly.

The rope system that a climber uses is always attached to what is known as a belay device; this is a piece of equipment that releases the rope slowly and gradually, but can also instantly seize the top and prevent it from running, should the climber fall. The climber attaches the belay device to the rock face, using a support system as a method of anchoring. The belay will have either a passive camming device or an active camming device. An active device will require the rope to be locked by the climber using a carabiner and their brake hand ( a carabiner is a metal loop, usually made from aluminium, which comes with a spring loaded gate). This kind of system is used when two climbers are climbing the rock face together and the lower climber is always in charge of ensuring that the belay device is working as it should.

Lastly, the person climbing will be attached to the belay device and the rope with a harness. One of the most important things to keep in mind when choosing a harness (aside from ensuring that the item is completely secure) is to make sure that it fits well, as it will most likely have to support your entire weight for prolonged periods of time. There are many different kinds of harnesses, including full body and chest harnesses, as well as traditional sitting ones and not all of them are equally suitable for everyone. Chest harnesses, for instance, have been found to increase the chance of damaging one’s neck when the climber falls.

In addition to these basic pieces of climbing equipment, climbers also wear protective hard helmets and will almost always carry chalk with them, on their belt, to ensure that they have a steady grip when they are climbing. There are a number of other pieces of climbing equipment that can also be used, but the above mentioned items are considered to be absolute essentials.

Article brought to you by Phil, a keen rock climber.