Not too long ago, boxing was the reigning champion of the fighting world, with fans shelling out millions of dollars in pay-per-view fees just for the chance to see the latest big contest. These days, things have taken a dramatic turn. Lackluster fights, greedy promoters and the inability to get the best boxers in the ring together have combined to torpedo the sport. 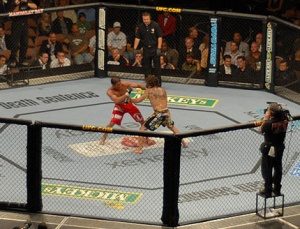 In frustration, millions of fans have turned to the Ultimate Fighting Championship (UFC) and other forms of Mixed Martial Arts (MMA). There’s big money in this growing sport, thanks to its bruising, unforgiving violence. As it becomes more mainstream, MMA is attracting a young audience of males, who dream of one day participating in an event. Unfortunately, many remain unaware of the potential downside to combating inside the octagon.

Boxing has left many fighters suffering with brain trauma; however, it does require its participants to wear padded gloves. MMA pits fighters against one another using little protection. What’s more, fights often end with one combatant left unconscious or physically injured.

In December of last year, at an MMA event in Joliet, Ill., 20-year-old Jeff Dunbar was paralyzed during a match in Chicago. Currently, he lacks the ability to speak or move his extremities, and doctors are not optimistic about his chances of recovery.

Many fighters find the fame and money that comes with MMA stardom overwhelming, especially if they come from a humble background. This is exactly what happened to Diego Sanchez, a successful MMA fighter who fell victim to con men and the flashy lifestyle that often accompanies MMA fighting.

Once he entered the limelight, Sanchez was targeted by investment scammers who bilked the fighter out of hundreds of thousands of dollars. In the end, Sanchez found himself broke and in debt to the I.R.S. for $230,000.

Even fighters who survive the octagon often end up with problems that can follow them years down the road. Many have difficulty securing jobs, thanks to the social stigmas attached to broken teeth and scars on the face. What’s more, according to Dr. Donna Blair, repeated trauma to the jaw and face can lead to joint problems that can result in debilitating symptoms.

“Dental trauma is not purely an aesthetic problem,” she said. “People who participate in violent sports may think of a lost or broken tooth as sort of a badge of honor, but then they start to experience headaches and jaw pain that they’ve never had before. The reason is that the dental trauma has altered their bite. The bad bite then torques their jaw joints which are called the temporomandibular joints. The abnormal jaw position causes TMJ disorder and can result in headaches, jaw pain, tinnitus and lots of other problems.”

Are You Ready To Fight For Your Life?

MMA gyms are popping up all over America, because young men and women see the glory of fighters on T.V. and think they have what it takes to join their ranks. Unfortunately, MMA is a sport that is very good at taking; sometimes taking it all. Based on current events, it’s clear that fighters need to protect themselves both inside the ring and out.

Ryan Lawrence writes for Off-Topic Media. Photo by Lee Brimelow. Thanks to Dr. Donna Blair for contributing to this story. Dr. Blair can be reached at her office in Fresno, California.