In my opinion, April is the month that the new NFL season starts and the time I start preparing for the football games I want to attend and what needs to be done for the Las Vegas Sea Hawkers in the next year.  The schedules come out in April and let’s not forget the all-important draft happens in this month too.  In April, my television is rarely off of some sort of sports news and my eyes are glued to the prospects for the Seahawks in the draft.  But the best part this year was the change in the uniform manufacturer from Reebok to Nike.

Of all thirty two teams in the NFL, the Seahawks were the only team to have a total makeover and boy did Nik 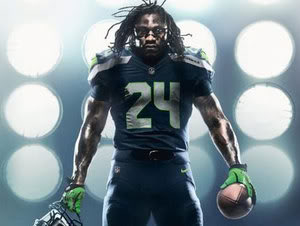 e do it right.  They worked closely with Pete Carroll, head coach, John Schneider, General Manager and Paul Allen the owner of the Seahawks to come up with a conceptual idea for the uniforms that encompassed the feel of the Northwest.  There has been mixed reaction from the fans on what they think of the uniforms with about a fifty/fifty split for and against.

Basic Uniform at a Glance

What Nike did for the Seahawks is the same thing that they did for the Oregon Ducks but not on the same scale.  We only have three basic uniform colors that can be mixed and matched where Oregon has many more combinations.  Our basic colors are Seahawk Blue for home, white for away games and a gray uniform that is not my particular favorite.  When I look at the gray uniform, I get the feeling of seeing a uniform that a prison football team would wear.  I do like the gray mixed with the blue uniforms however and only have issues with the gray jersey and pants worn together.  I loved the lime green jerseys and was disappointed that there wasn’t one this year. 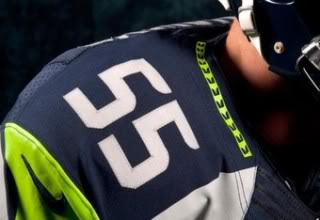 nt the 12th Man, what the Seahawk fans are called, in the uniforms.  The interior collar of the jersey has a 12 stitched into it and there are twelve Northwest Native American feathers around the exterior of the collar and down the outside leg of the pants.  I do get some of my favorite lime green colors throughout the uniforms in small details and I do love that aspect.

Not only were our uniforms retooled, but our logo got a bit of a redo but not enough that you don’t recognize it as

a Seahawk logo.  All Nike did was change the teal in the bottom of the Hawk to the Wolf Gray of the new uniforms.  Again, I’m not a big fan but since there were no other changes I can live with it.  To me, the gray looks like a washed out version of the teal, it makes the logo look distressed and old rather than bright and new.  But at least the faded teal in my tattoo now looks like our new logo so they saved me some money having my tat touched up.

The accessories such as helmets, shoes and gloves have been retooled as well and I really like what Nike has done with the helmet and the gloves.  The shoes are standard cleats that have a variety of colors the players can choose from but probably not the Skittle Shoes that Marshawn Lynch was fined for wearing last year.  The logo on the helmet now meets at the back which gives the Hawk a meaner look and the gloves each sport half of the logo and when put together form the entire Seahawk.  These additions really make the full uniform pop and pull the look together well.

Overall, I’m very pleased with our new uniforms and am looking forward to seeing them in action on the field.  Now that the new season has started, the schedule is out and the draft is only a few days away, football has again encompassed my life.  I only have one question, “Is it August yet?” 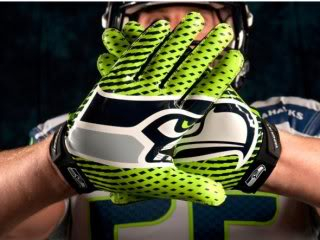 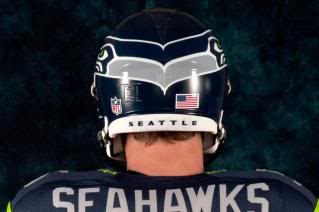