There have been many different takes on what is happening with Seattle Seahawks Coach Pete Carroll and the quarterback controversy.  Coach Carroll is not calling this a controversy and instead looks at it as a competition for the starting spot.  Seahawk fans who have seen what Coach Carroll does with competition understand this reasoning and are anxiously waiting to see who gets the position.  As a diehard Seahawk fan, I myself have been wondering the same thing and I have my own thoughts on who I think the starter will be.

Tarvaris Jackson – As the incumbent starter, odds are on Jackson to take the starting snaps for the Seahaw 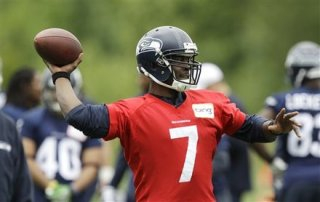 ks.  I do not see it that way as I do not think he was productive enough last season.  He had a sluggish start in the position last year and was only slightly better than backup Charlie Whitehurst.  While he did make an improvement towards the end of the season, his thought process is still something of a worry.  He takes too much time to read the field and holds the ball for too long.

When he does make a decision, it is usually the wrong one. This happened mostly late in the game and in crucial plays that meant the difference between a win and a loss.  Of course this can be discounted to the shorter training camp due to the lockout and his pectoral injury but at the end of the day, he was going into an offense he understood with Darrell Bevell’s hiring as Offensive Coordinator. 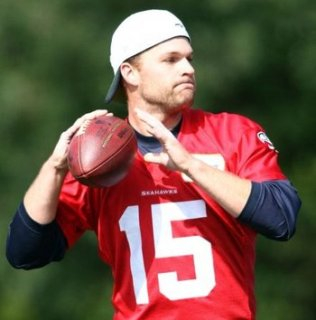 nn was acquired as a free agent during the off season from the Green Bay Packers.  The last “Matt” we got from Green Bay was Matt Hasselbeck and he took us to the Super Bowl.  There are high hopes that Matt Version 2 offers us the same leadership that the original did.  One thing that strikes me as a good sign is both QBs are not only from the Packers, but both were backups to winning quarterbacks who have strong personalities and who both took their teams to the big show and won.

Flynn is an individual and it is not set in stone that he can be as great for Seattle as Hasselbeck.  It is my opinion however that he will get the starting job.  I feel he has more poise in the pocket and while only playing two full games during the regular season for Green Bay, he played phenomenally in both.  He has a huge arm and is incredibly accurate.  He can scramble and makes good decisions.  Flynn, in my opinion, is the polar opposite of Jackson and this is why he will win the starting position.

Russell Wilson – Yes, Russell Wilson is in the hunt for the starting position as a rookie because he impressed Coach Carroll.  Even though he is considered short at 5’ 11”, he has a great overhead release of the ball that puts to rest the height 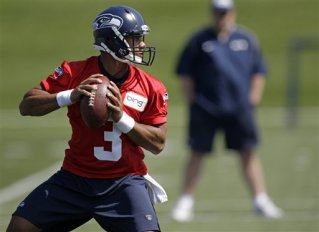 issue.  He had a great college career and is much more poised and mature than some players who have been in the league for a long time.  I like Russell Wilson but do not see him as a player of today but our QB of the future.  I see him making the squad but holding the clipboard.

Josh Portis – Last year’s rookie quarterback was very impressive in the preseason games that he played in.  I personally s 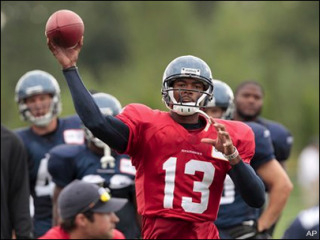 aw him play live in San Diego and was happy with his performance.  He actually played better than T-Jack and definitely showed a great deal more poise.  Unfortunately I do not see him as any type of threat to the quarterback competition.  I believe he will be traded, dropped or placed on the practice squad.  There simply is not room on the roster for four quarterbacks and even the press conferences with Coach Carroll do not even mention him in the competition.

I am seriously excited for training camp to start and to find out who is going to become the starting quarterback for the Seahawks.  Knowing Coach Carroll, there will not be any formal announcement until the preseason is well under way.  Every Seahawk fan will be waiting on pins and needles until the announcement has been made and again, my vote is for Matt v.2.